After a string of posts on eco/modernism, it’s time for something earthier. And since the Small Farm Future office recently received a request for a feature on compost toilets, we’ve decided to bring you a world exclusive photo-essay on the sanitary facilities at SFF headquarters. What could be earthier than that?

There is a connection to the last cycle of posts, though, which I hope I’ll be forgiven for mentioning briefly. Because it’s not hard to find texts within the ecomodernist corpus that scorn the humble compost toilet1. Perhaps there’s a simple division in the world between those who think it’s absurd to compost human waste, and those who think it’s absurd not to. But consider the consequences. In India, more than half the population (which amounts to something not too shy of 10% of all humanity) has no access to a latrine of any kind. Open defecation, it has been shown, is associated with intestinal illnesses causing childhood stunting, and this results in numerous health problems throughout the life course2. It’s also associated with assaults on women and children occasioned by their search for secluded spots for defecation. And that’s to say nothing of the fertility lost to agriculture by failing to make use of human waste (which is considerable – by my calculations, the urine produced by Britain’s population could furnish something like 40kg of nitrogen per hectare of cropland, which would put us well on the way to agricultural self-fertility).

The narrative of ecomodernism makes much of high-tech items like golden rice and nuclear power as means for improving the lot of the poor. But since all a compost toilet requires is some wood or plastic and a bit of easily-imparted knowledge, I’d be interested to see an economic evaluation comparing the per dollar benefits of creating access to compost toilets to poor communities lacking latrines with the fancy technologies preferred by the ecomodernists. Though on reflection, not that interested – I’m not against worthwhile research, but I guess one reason I quit academia was a sense that a lot of the money devoted to economic evaluations of whether to do this thing or that thing was probably better spent on actually doing this thing or that thing. In fact, what I’d really like to see is an economic evaluation of how useful economic evaluations are. But I digress – rather embarrassingly, as I’ve scarcely even started.

So let us turn our attention to some compost toilets in their practical manifestations. Here’s one, and ain’t she a beauty? This is the first one we built at Vallis Veg – a magnificently lofty throne from which I’ve surveyed my farm on many a fine sunny morning with the door thrown wide open just like this to welcome the rising sun, while I simultaneously perform other important work. Though not if I’m expecting visitors. Unless I know them very well.

We now have four separate compost toilets on the premises, all source separating ones, and all basically variants on the same theme. The unlovely IBC in the foreground of the photo showcases our receptacle of choice for the solids in two of our toilets. As Michael argued under my last post, the near future may turn out to be a salvage economy – so here’s my tip: invest in IBCs now! Source separation makes a lot of sense, to my mind. The urine is more readily usable, and it’s also much bulkier so if it’s mixed in it creates a slurry that’s trickier to deal with. Standard sewage systems are even more slurry-based, of course. All that wasted water! In urban situations no doubt it’s harder to avoid slurry-based sewerage, just as industrial farming demands slurry in preference to the simple farmyard manure systems of the small mixed farm, occasioning the need for more complex downstream treatment, if it’s treated at all. I just feel so sorry for all those poor animals cooped up in their little pens and so alienated from their environment that they’ve been trained to flush away their own fertility.

Now I’d love to be able to take you for a look around the back of my toilet (sorry if that sounds a bit wrong) but unfortunately I’ve had a devil of a job uploading some of my photos due to what a Google search reveals is known as “the notorious WordPress upload problem”. Too notorious for me to solve just now at any rate. So you’ll just have to imagine a chimney into the IBC, which funnels nasty smells safely upwards into the innocent Somerset air. And a large square of dark fabric covering it, the idea being to make it darker inside so that flies are attracted up the chimney and out towards the light. We haven’t generally found flies to be too much of a problem, except on the odd hot, still summer day when there are a few more around than feels ideal. Maybe in a climate less given to roiling cloudiness than western Britain, more elaborate insect-proofing may be required. And then to the right you can see imagine 25 litre containers (old wholesale laundry liquid cans) where the urine goes. We have about 20 of these. When almost all of them are full, we empty them onto our woodchip compost windrows. Not a particularly pleasant job – more because of the weight of manhandling the cans than their somewhat noxious contents – but it doesn’t need doing all that often.

The compost toilet in the picture has served us loyally for the last five years or so. The IBC has only just filled completely (though the site wasn’t residentially occupied until 18 months ago), and we’ll now let it mature for another 2 years before using it (probably not directly on food crops – more likely on top fruit, willow or hay). But we recently came across the new-fangled idea of having a toilet indoors. Apparently, it’s the very rage nowadays among all the fashionable folk. And so with the help of our friends Joanna and Josh, we recently built a fetching little wooden cabin-style addendum to our humble abode comprising separate indoor composting toilet and shower room, which unfortunately you’re also mostly just going to have to imagine. I really wanted to demonstrate how well it blends in with the adjoining north wing of Vallis Veg Mansions, which we built according to a traditional English farmhouse design dating right back to the 1947 Town and Country Planning Act, a signal piece of legislation that made the pursuit of new dwellings in the countryside other than those possessing wheels something of a lifelong quest. But you’ll just have to imagine a nice little cedar-clad cabin adjoining a godawful plastic trailer. Still, my bureaucracy-busting alter ego, Spudman, will soon be dusting off his cape and preparing to do battle with Mendip District Council once again in pursuit of a wheel-less house. But that’s a story for another time.

The indoor toilet has proved a hit with the family so far, and certainly with me. No more pulling on boots and venturing out in the lashing rain in the middle of the night after a few too many down at the Farmers Arms. Again, I’d like to show you our double-chambered toilet design, with two IBCs enrobed in their cedar raiment. Unfortunately, that’s something else I’m going to have to leave to your imagination. We figure that it takes a couple of years to fill an IBC, and then another couple of years of undisturbed composting. Hence two IBCs so that we can alternate between them.

Now, something I can show you is the door to the inner sanctum of this temple of self-fertility. 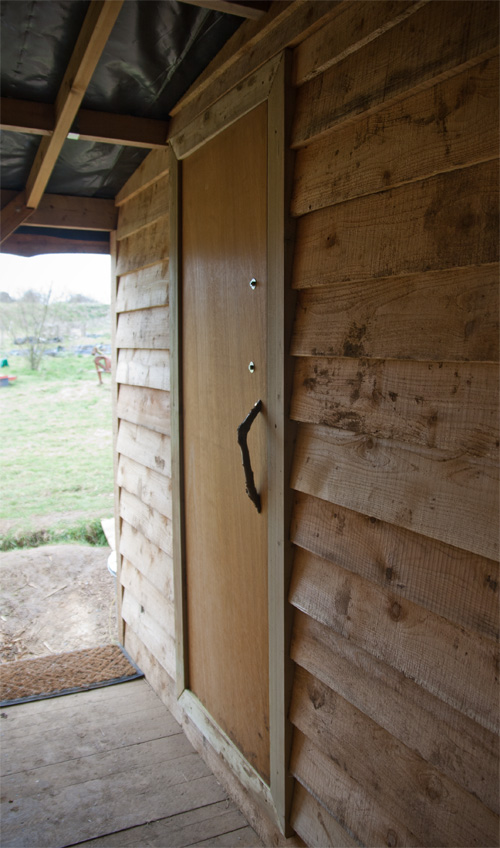 Would you like to take a look inside? Well, all right then… 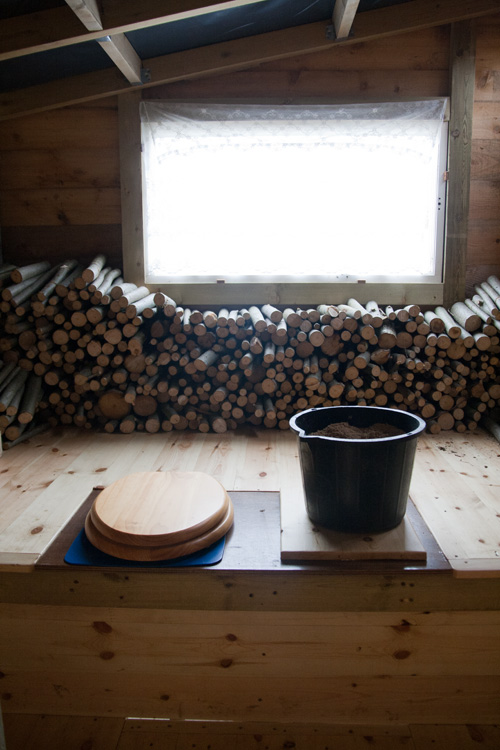 …and there you have it, our smallest room in all its woody glory, with a stack of cut willow pollards drying at the back ready for the woodstove next winter. And so that brings our tour of the compost toilet to a conclusion – I hope you… Sorry, what was that? You want to see what? Hmmm, well, where I come from I was taught to honour a visitor’s requests whenever possible, however unusual. So, er, here’s a world exclusive view down my toilet. 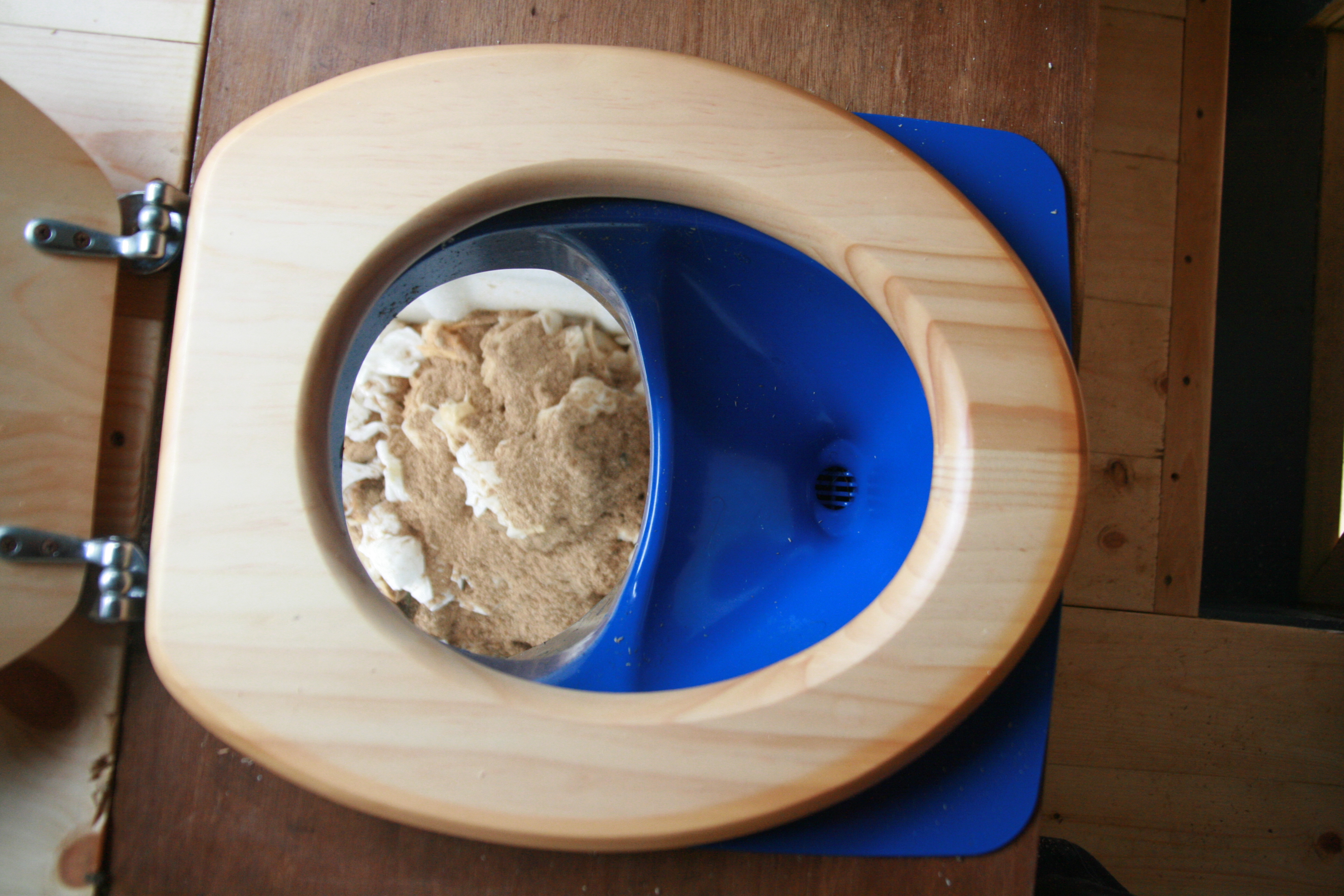 You’ll notice the advanced source-separating technology hidden in the toilet bowl, which cleverly accommodates itself to both female and male anatomies – albeit in the latter case only if one adopts a seated posture for excretions of both kinds. Which I’ve noticed is quite beyond the capacities of certain among our male visitors, who leave the distinct impression that sitting down to pee is an insurmountable challenge to their deepest sense of self. They also often leave a suspiciously moist residue inside the IBC where it ain’t supposed to go. But I find that men with experience of organic growing are generally better able to take it in their stride. I like to think this is because we’re somehow more secure in our masculinity. Though I fear it’s more likely that time spent organic gardening has fostered a willingness to endure any indignity in the hunt for good compost.

Beside the bowl (previous photo) you’ll note a bucket of sawdust, which we mostly obtain at no cost from a local forestry sawmill (so no dodgy glues and suchlike in our compost). A handful down the bowl after each deposit adds a useful shot of carbon and has the added benefit of concealing the visual and olfactory evidence of one’s effusions from the following hapless visitor. Without source separation, a lot more sawdust would be required, reducing system efficiency.

And, finally, let me show you the urine can in the new toilet, usually concealed by the floor hatch you see in the picture. A piece of high-end technology that would surely delight Stewart Brand himself…

I should add that I deserve very little credit for designing or building the incredible contraptions on show here, which are the speciality of my beloved. Pretty much my only contribution has been wiring in the lights. But I like to think that’s my role in life – whether in the wide open reaches of the blogosphere or the narrow confines of our backwoods abode, I bring illumination where previously there was darkness…

And that’s pretty much it. Next week: inside my laundry basket.

46 thoughts on “A tour around my toilet”