I’ve now reached Chapter 3, ‘The return of the peasant’, in my present blog cycle about my book A Small Farm Future, and I’m going to linger here for a few posts, even though it’s only a short chapter. I’ll begin at rather an oblique slant to the substance of the chapter by relating a story told to me by my friend P, reproduced here with his kind permission. 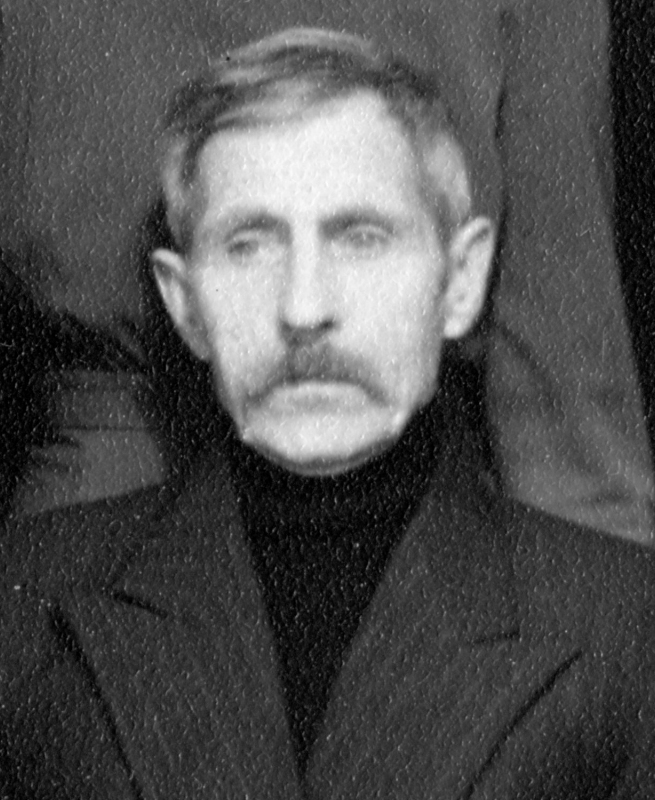 This photograph is of P’s grandfather, G, who was born in the province of Karelia, Eastern Finland, in 1889. At this time, Finland was an autonomous duchy of the Russian empire, and Russian Orthodox Christianity was prominent in Eastern Karelia. G’s ancestry in the immediate locality where he was born went back at least three generations, probably more. The subsistence-oriented swidden farming which we were recently discussing here (later transplanted to Appalachia by Scandinavian migrants) was a recent reality in this area. As P puts it, “this was a man whose roots were deep in the place that he came from. His cultural and farming practices were also deeply rooted in this landscape”.

G was the oldest of six children. When his father died in 1911 it fell to him to sort out the inheritance and allot the family land among his kinsfolk. G himself moved a little way from the village and established a new farm. In 1915 he got married, and between 1917 and 1937 the couple had nine children, two of whom died in infancy from pneumonia.

Swidden farming had been actively suppressed by the Finnish government in the mid-19th century as the country’s economy became increasingly connected with the wider world, and the timber resources of its wooded slopes imbued land with a higher monetary value than that represented in the crops of rye and oats that the swidden farmers grew to feed themselves. G’s farming career was built on these old and new foundations. The family grew cereals, vegetables, flax and hay, kept livestock and harvested wild fruits and fish for their own consumption, but also pursued market ventures to stay afloat in the newly monetized local economy.

In 1917, in the aftermath of war and revolution in Russia, Finland became independent and immediately plunged into a brutal civil war between left-wing and right-wing factions. P is unsure how this played out in his grandfather’s life, but there are family memories of famine during this time which were partially mitigated by their access to farmland. A few years after the civil war, a brother of G’s was shot dead by a policeman in a bar. As one of G’s daughters recalled the incident, “Uncle had been able to say ‘don’t shoot’ but the police at the time did not wait for explanations”. G assumed financial responsibility for the child of his slain brother.

In the Winter War of 1939-40, the Soviet Union attacked Finland and overran eastern Karelia. G’s family travelled west as war refugees in a goods train, while G himself packed up what he could from the farm into a horse-drawn cart and walked across the country with it to join them. Among new environs in Finland’s Lutheran west, G’s family and the family of one of his brothers were taken in by a local family in return for farm work. Later, the government allocated them some land in North Karelia to farm themselves. Around this time, G’s oldest son was hit by shrapnel in an explosion and permanently injured. This son’s wife died in childbirth. One of G’s daughters died of meningitis in the crowded home where they were living in exile.

In the Continuation War of 1941-44, Finland – temporarily allied with Nazi Germany – initially pushed Soviet forces out of the country. G and his family returned to their farm in eastern Karelia. The fighting continued. One of G’s daughters worked in civilian support of the war effort, including driving a wagon heroically under enemy fire to resupply frontline troops. Later, she was badly injured in a landmine explosion. As the Continuation War went against Finland, G and his family had to flee west again, using similar methods as before, with G once again walking across the country with a cart loaded with what he could rescue from the farm. After several vicissitudes, the family ended up back at the land they’d been given to the farm in north Karelia in the aftermath of the Winter War.

At the conclusion of World War II, the Soviet-Finnish border was settled, with the family’s original farm and homeland in east Karelia now falling within Soviet territory and permanently lost to them. G continued farming the new land he’d been given in Lutheran north Karelia. The photograph you see was taken in 1950, at the wedding of one of G’s sons. G died nine years later, three years before his youngest daughter gave birth to my friend P in England.

P showed me the picture of his grandfather I’ve reproduced above, before telling me the tale of his life that I’ve related. We agreed that his face seems to hold a sadness, perhaps a grief. Another friend who was shown the picture said that G looked ‘defeated’.  He was, apparently, an untalkative man, and he’s now long dead. He cannot tell us his feelings, and for sure nobody else can either.

But such silences don’t stop us today from expressing our opinions on what peasant farmers like G and others for whom history provides no amplifier must have thought. A common talking point nowadays is that peasant life was and is one of utter misery and backbreaking labour that nobody would ever voluntarily undertake. On page 78 of my book I cite a few authors who’ve worked this particular seam. They’re not hard to find.

But to weigh in with my own voice in the face of G’s silence, I wonder if this is the story he would tell. For sure, there’s relentless work and now-preventable disease in his story (as there still is for too many people today), and there’s heavy responsibility to care for a wider family through uncertain times. But it’s surely worth heeding too the nature of those times. G was one of many who lived his life in the crosshairs of global ‘development’, and who farmed under the ill-starred sign of political forces much larger than their local worlds. A famine caused, as they usually are, by politics and not by ‘natural’ events, the loss and injury of family members to the hostile forces of the state (the army, the police), the loss of natal land beyond an uncrossable modern border, possibly the loss of religious and cultural orientation too, the gnawing uncertainties of war, refugeeism and reliance on strangers, the hard work not only of farming but of establishing a new farm, not once but repeatedly in the face of a changing world. New politics, new borders, new nationalisms, new histories cascading through the early twentieth century. I wonder if it was the strain of these things more than the familiar seasonal cycle of hard work on the farm that we see in G’s sad face.

We’ll never know. An unbridgeable and silent river of history divides our present world from the one that G knew. As I see it, the case for a turn to peasant farming today is about trying to meet the challenges of the present, not about trying to recross that river. But maybe we can meet those challenges better if we’re able to bear witness to the pain that history has caused to peasant farmers like G, and also if we’re able to acknowledge that in their ability to furnish a household livelihood in the face of difficult circumstances we might look to farmers like him as inspirations in the difficult journey that lies ahead for us, rather than as yesterday’s people remembered only in the silence of old photographs.

21 thoughts on “Can the peasant speak?”