About a year ago I started publishing on this site various projections for how the future population of southwest England where I live might be able to feed itself substantially on the basis of small-scale, relatively self-reliant ‘peasant’ farming – convincing myself, if no one else, in the process that such a ‘Peasant’s Republic of Wessex’ might be feasible. The notion that a small farm future of this sort may occur and may even be desirable and worth striving for is, I confess, hardly a mainstream political position. And yet it’s one that I’ve come to, for reasons that I’ve documented here over the years. Essentially, I think that humanity faces a series of interlocking ecological, economic, political, cultural and social crises that, if they’re resolvable at all, are most resolvable through a turn to small-scale, predominantly self-reliant farming. Actually, I see this way of life less as a ‘solution’ to modern ‘problems’ as a non-modern way of being that’s intrinsically less problematic. But I’m anxious to avoid easy dualities – not everything about modernity is necessarily bad, and not everything in a turn to small farm agrarianism would necessarily be good. I’ll say more about that in due course.

The main difficulties in achieving a turn to small-scale agrarianism are not agricultural, but social and political. So I now want to turn my attention away from issues of farm scale and structure towards these socio-political issues. As I started thinking about them, I found myself constantly drawn to history and to what the past may be able to teach us about the possible course of a small farm future. I’m still not really sure whether it does have much to teach us. I said above that a small farm future would be non-modern, but that’s not the same as pre-modern: a non-modern small farm future needn’t necessarily much resemble a pre-modern small farm past. Nevertheless, since the past is the main guide we have to the future, it seems like a good place to start. Originally I planned to write a blog post that was to be sardonically entitled ‘The history of the world in 10½ paragraphs’ (with apologies to Julian Barnes) in which I was going to lay out a few broad historical themes before moving on to examining the socio-political shape of my future Peasant’s Republic. But the task kept growing – there has, after all, been quite a lot of history. Almost before I knew it, it had turned into ‘The history of the world in 10½ blog posts’ – still, of course, without going much further than laying out a few broad themes. So this is what I’m now publishing. The entire c.27,000 word essay is now available from the Publications page of my website, but I’m also going to publish it in hopefully more digestible week-by-week blog-post size instalments over the next couple of months. 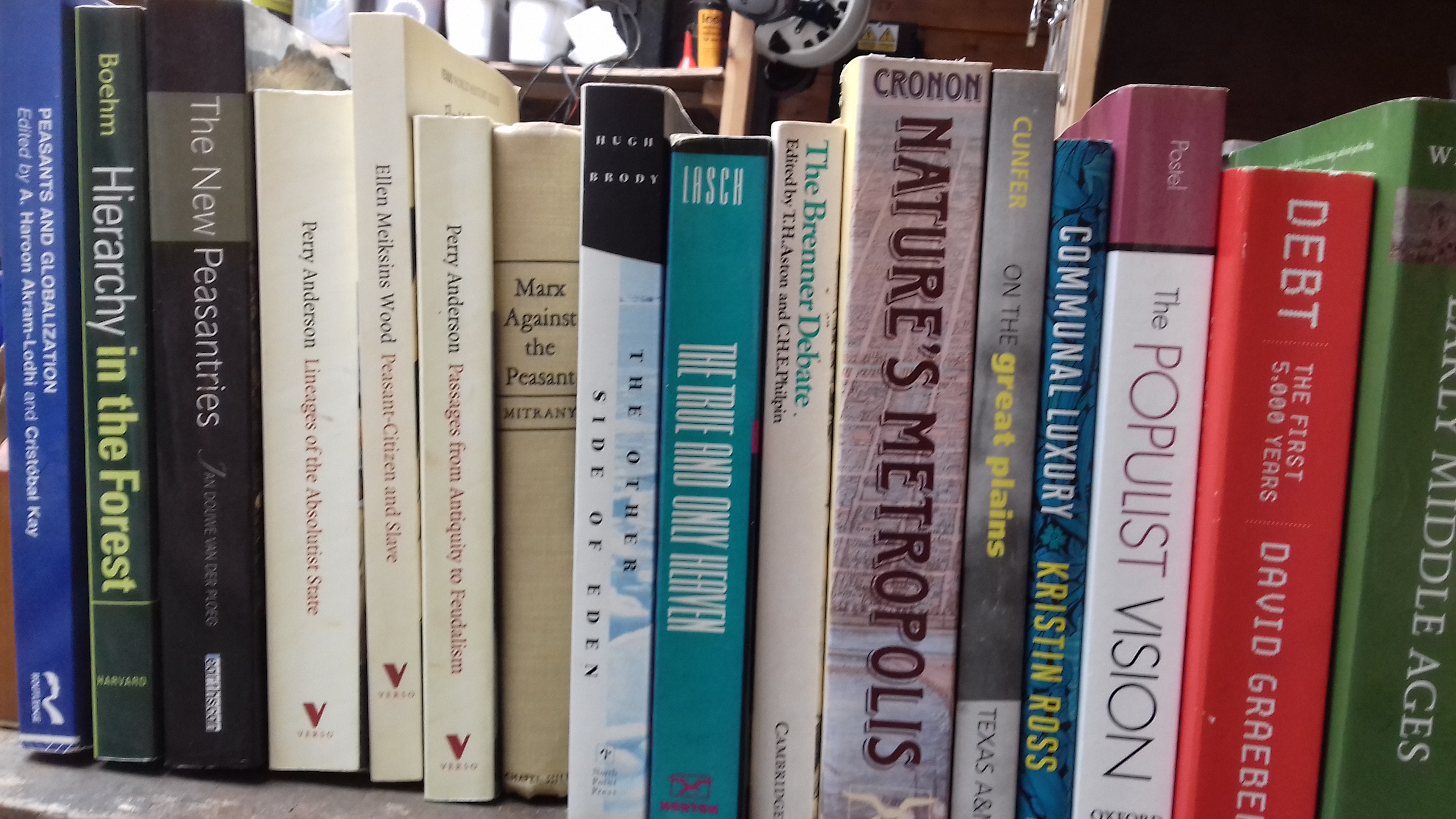 It’s probably worth devoting just a few sentences to explaining what this exercise is about and what it isn’t. It’s surely obvious that nobody can really write a ‘history of the world’, however many words or years they devote to it. So I haven’t even tried. What I have tried to do is lay out the main patterns and structures of the past as I see them that I think we have to reckon with today if we’re to wrest a comfortable and sustainable future (which I think will have to be largely a small farm future) from the troubled present. This involves tracing political and economic relationships over large parts of the globe, which partly justifies my title. But I’ve made no attempt to trace human history even-handedly across all times and places. I’m open to comments and criticisms of things I’ve omitted, but if they’re of the form ‘your analysis is wholly lacking in an account of the struggle for self-determination in Mozambique’ my response will be a rather uninterested ‘yep, you got me there’. Challenges to my rendering of the larger structures I discuss will gain more of my interest.

My focus here is mostly on the way that local societies, local farms, local human ecologies, get incorporated into bigger political and economic structures – and conversely how they de-incorporate or resist that process. In general I think de-incorporation is a good idea, and is probably going to happen anyway whether it’s a good idea or not. But I don’t think any kind of de-incorporation or local autarky is necessarily desirable, nor do I think large political structures are necessarily undesirable. For me, the relationship between the state and local human ecologies is problematic precisely because it admits to no easy answers. On reflection, I fear that I haven’t justified here as clearly as I should have done why small-scale or ‘peasant’ farming is so important, but perhaps it’ll be easier to do that in another post in the light of the historical analysis provided here.

Another thing I say little about here, even though it’s the overarching context for the whole essay, is the set of ‘environmental’ problems humanity currently faces in relation to ecological degradation, climate change, energy futures and so on (I’ve written about them fairly extensively elsewhere on this website). This is essentially because I don’t think issues of energy and environment have generally been the fundamental movers of human history in the past (which is not to say they haven’t been important). I suspect they may be prime movers of human history in the future, and one of the problems humanity now faces is learning to acknowledge this novel fact. Joe Clarkson drew my attention to Fred Cottrell’s interesting book Energy and Society, which I might have incorporated more fully here if I’d come across it earlier. Energy capture certainly provides one worthwhile frame on which to hang an account of human history. So perhaps does crop development. These aren’t the frames I’ve chosen here, but that’s not to say that they (along with other aspects of ecological constraint) aren’t crucial factors now facing us. The truth is quite the opposite.

As I wrote the essay, I tried to keep in mind the hope that people other than me might read it, but as per my last post in many ways it’s a rather personal odyssey through my intellectual history, and also a kind of aide memoire for issues I’d like to come back to in the future, so the essay involves a certain amount of personal wrestling with historical issues where I feel the need to work out a position. Which is another way of asking forgiveness for what I fear may seem like various weird digressions in the text. I’ve fretted over this essay, perhaps a little too much, and probably re-edited, cut and pasted it too many times for its own good, so if there are any parts of it that make you think ‘Oh for goodness sake, cut this out and just get on with it’, I’d be interested to hear. If, on the other hand, you feel that way about the entire essay, then there’s no need to contact me – but sorry for wasting your time. For the time-pressed, let me broadcast upfront the main issues I’ve extracted from my historical analysis which I think we need to juggle with in figuring out a just and sustainable small farm future:

If you require any further justification for those points…well, you’ll just have to read my next 10½ blog posts…

In relation to notes and referencing, at the risk of demonstrating my utter unoriginality I decided to reference the essay fairly comprehensively so that I can use it easily as a resource for future writing. I’m publishing the entire essay along with notes and bibliography on the Publications page of the website, and then chopping it up into weekly blog posts with footnotes (but not references) at the end of each post. If you want to chase up a reference, you’ll find it in the bibliography at the end of the full essay on the publications page.

I hope the essay might find some interested readers. I’ve certainly found it interesting to write. The key historical figures in it, ones who lurk forever at the interface between the local human ecologies and larger political-economic structures discussed here, are peasantries – endlessly pitied, exploited, romanticised, derided, expropriated or written off, but unquestionably still here. The essay is dedicated, in more ways than one, to them – though not, I hope, uncritically.

In the beginning, there was a Miocene ape – the common ancestor of our genus Homo and our closest living relatives, the chimpanzees and gorillas.

…well, that’s probably enough for one blog post. We’ll pick up the thread again next week. But if you can’t wait that long to find out what happens next, you know where to look.

18 thoughts on “The return of the peasant: or, the history of the world in 10½ blog posts”