As I’ve mentioned, I recently visited Nicaragua as part of a research project on ‘Transitions to agro-ecological food systems’ that I’ve been involved with, conducted by the Institute of Development Studies at the University of Sussex. The research involved working with agro-ecological farmers in the UK, Senegal and Nicaragua, and the trip brought together some of the farmers and researchers from each country. In this post, I thought I’d offer a few informal reflections on the research, and the Nicaragua trip.

In each country, the researchers took a kind of ‘citizen’s jury’ approach to the project, getting the farmers to map their experiences of the food system and then to define specific issues that they wanted to research further in order to ease the desired transition to an agro-ecological food system, followed by a workshop with ‘change agents’ – people with some capacity to help realise these changes. At the Nicaragua meeting, we came together and discussed the similarities and differences between the three countries in the focus of our deliberations and the ways forward. Here are some of the issues that came up:

Seeds: maintaining local farmer control of seed production and markets (and fighting the encroachment of transgenic crops) was a major theme both in Nicaragua and Senegal, but wasn’t much discussed in the UK. There certainly are concerns around seeds in the UK – quite similar ones to the concerns in the other two countries – but few farmers or growers here take responsibility any longer for their own seed production. There are those who argue that this is a good thing – plant breeding is a highly specialist business, and farmers benefit from leaving it to the experts and sticking to their own skill set. One problem here is that what suits the ‘business’ of plant breeding doesn’t necessarily suit the business of being a local agroecological farmer. There’s much to be said for farmers and plant breeders working in concert, but the structure of the agricultural industry often puts them at loggerheads. On that note, I enjoyed meeting actual farmers from relatively low income countries who told me point blank that they wanted to retain control over local seed production and didn’t want GM crops. No doubt there are other shades of opinion in their countries, but I’ve been told more than once by other privileged westerners/northerners that GM crops are an unquestionable boon to the world’s poorer places and that my scepticism about them merely indicates my white, western/northern privilege (or, in the words of one especially apoplectic ecomodernist, that my ideology was akin to stealing wheelchairs from Bangladeshi children), so it’s good to know that my views are shared by others less white and geopolitically privileged than me. In truth, I already knew it – any claim that a particular kind of plant-breeding technology must be inherently pro-poor is obviously bogus. Still, you can’t beat hearing a story straight from the root, rather than one filtered through layers of researcherly foliage.

An additional problem with giving up seed-saving is that it’s another small step on the journey that alienates farmers from the wide suite of skills they need to fully inhabit the land. I for one am a little envious of other countries who haven’t yet taken that step.

Traditional cuisine: finding ways to encourage people to eat traditional, locally-grown foods rather than processed foods heavy in global commodity crops was a theme in all three countries – though again it emerged least strongly in the UK. Teaching cookery skills and sponsoring local restaurants were avenues that were being explored. In the UK, one project has involved doctors prescribing fresh vegetables for low income patients on poor diets, with local authorities paying small-scale local producers to provide the food – a use of public money with a reportedly good social return on investment.

Markets: ‘the market’ is one of those words that conflates things which ought to be separated. In each of the three countries, albeit in different ways, the farmers wanted to strengthen ‘the market’ in the sense of local venues where buyers and sellers come together physically for the exchange of things they need. In order to do this, we agreed that we needed less of ‘the market’ in the sense of a non-physical, globalised abstraction in which a minority of people launch money in order to receive more of it in return. Though, saying that, there can also be problems with local markets – especially when their control falls into the hands of a few. The best solution is for the majority of people to have access to land, the ultimate source of the values able to come to market… Perhaps I should qualify that statement by way of a quotation from IDS big cheese Ian Scoones, whose interesting if rather turgidly academic book Sustainable Livelihoods and Rural Development: Agrarian Change & Peasant Studies I’m reading at the moment:

“The real world is of course more complex than the usual default policy debate constructed around a set of simple dichotomies – large versus small, external versus local, food production versus cash crops, backward versus modern” (p.59)

Indeed, a case can be made along these lines for allowing markets to be complemented by ‘the market’, but as Scoones himself points out ‘the market’ is supported by a “strong coalition of investors, private sector agribusiness players, national governments and local elites” whose “expert-accredited narrative” (ibid.) has much more influence over economic reality than the food sovereignty agenda we were articulating in Nicaragua. Therefore I’m happy to line up with my fellows in the marketing discussion group at the meeting (pictured) and press for the food sovereignty agenda. Never doubt that a small group of thoughtful, committed citizens can change the world… 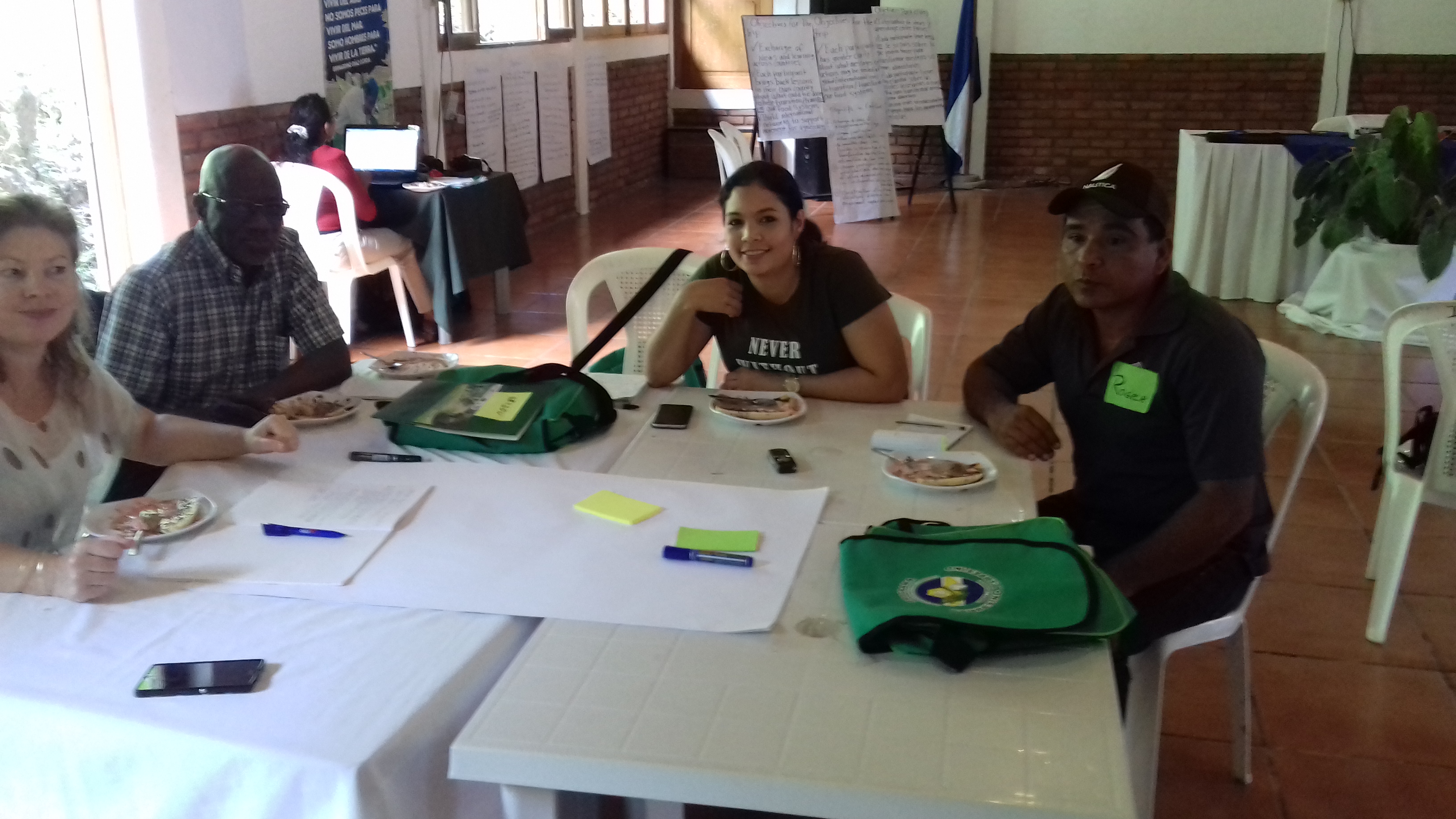 Land: access to land for agro-ecological farming was a big issue in the UK, less of a concern in other countries. I’ve probably harped on about it often enough on this blog to keep it brief here. The UK farmers put some emphasis on the role of the planning system in relation to private land purchases, because this is an easy hit for improving the situation without having to introduce any major political or economic changes. Issues around farm tenancies and publicly owned farmland were also highlighted in the UK. In Nicaragua, the government programme that provides women with a plot of land sufficient for personal needs, together with some household livestock, excited some interest…particularly among a few of the women from the other countries who suddenly expressed a hitherto latent enthusiasm for emigrating to Nicaragua. Which brings us to…

Female empowerment: I heard some conflicting views about gender oppression (and thence the need for the aforementioned programme) in Nicaragua. While we were travelling around the country I saw a few placards in communities stating “Aquí respetamos a las mujeres”, which kind of implies that maybe there are folks allí que no respetan a las mujeres. Not that the UK is innocent of gender oppression. Certainly, gender issues loom large in what I’ll tentatively term “sustainable development”. Which reminds me…I need to round off my ‘return of the peasant’ blog cycle with a look at gender soon.

Commodification & self-reliance: another issue in relation to making markets more functional is reducing their levels of commodification – ‘commodities’ in the sense of traded objects entirely torn from their local contexts of production. In Senegal, this manifests in peanut farming, which is environmentally destructive and makes growers dependent on global commodity prices. The common refrain is that such commodity crops are the route to wealth which, through specialisation and the magic of ‘the market’, enables farmers to buy themselves out of the kind of miserable subsistence existence associated with mixed cropping of local food crops, where they can barely scratch a living from the unforgiving earth. Each of the three countries had their own local manifestations of this ideology, and each country’s farmers also had distinctive counter-narratives insisting that it ain’t necessarily so.

Subsidies: I mentioned the attraction to female farmers of moving to Nicaragua, but some of the farmers from the other countries kinda liked the sound of moving to the UK to harvest some of the EU farm subsidies they’d heard about. So we from the UK had to explain the realities of the system: in a few years of stressy bureaucratic wrangling, I managed to wrest no more than a thousand quid or so out of HM’s government, before it decided to stop small-scale farmers from claiming altogether. Meanwhile, and talking of HM, the queen netted a cool half a million a year from the scheme. Oh well, I guess she needs it more than me. But, more important than the inequities between small and large-scale landowners farmers in affluent countries is the way that US and EU subsidies punish farmers in less affluent countries – such as the anti-competitive $1 billion or so going to US peanut farmers, to pick an aforementioned crop. So, to get a little technical, here’s a brief primer on the clean economic logic of free markets: the greatest net benefit results when countries remove protectionist measures and compete on equal terms in liberalised global markets, except when the most powerful countries decide not to.

There are also, of course, the numerous implicit subsidies associated with fossil fuel use and other nasty economic externalities – a general experience common to all three countries, albeit with some differences of detail.

Farmer networks and change agents: there are more small-scale and agroecological farmers in Nicaragua and Senegal than the UK, with richer interactions between them and the organs of government, and more powerful small-farmer organisations such as (talking of peasants, as we were under my last post) Nicaragua’s Programa campesino a campesino. In the UK, I think it would be fair to say that – despite the researchers’ best efforts – we struggled to get any ‘change agents’ to talk to us who had significant power to change the status quo. This seemed to be less true of Nicaragua and Senegal, though that’s not to say that the life of the small-scale agroecological farmer in those countries is all plain sailing. Perhaps one of the reasons it was hard to engage policymakers in the UK is that they’re all so busy trying to work out what the hell is going to happen to UK farming after Brexit. And here it’s fascinating to note that Michael Gove, arch Brextremist and now head honcho at DEFRA, is giving the keynote speech at the forthcoming Oxford Real Farming Conference – unless he accidentally booked himself into the wrong conference. I’ll be reporting back with interest on what he has to say. 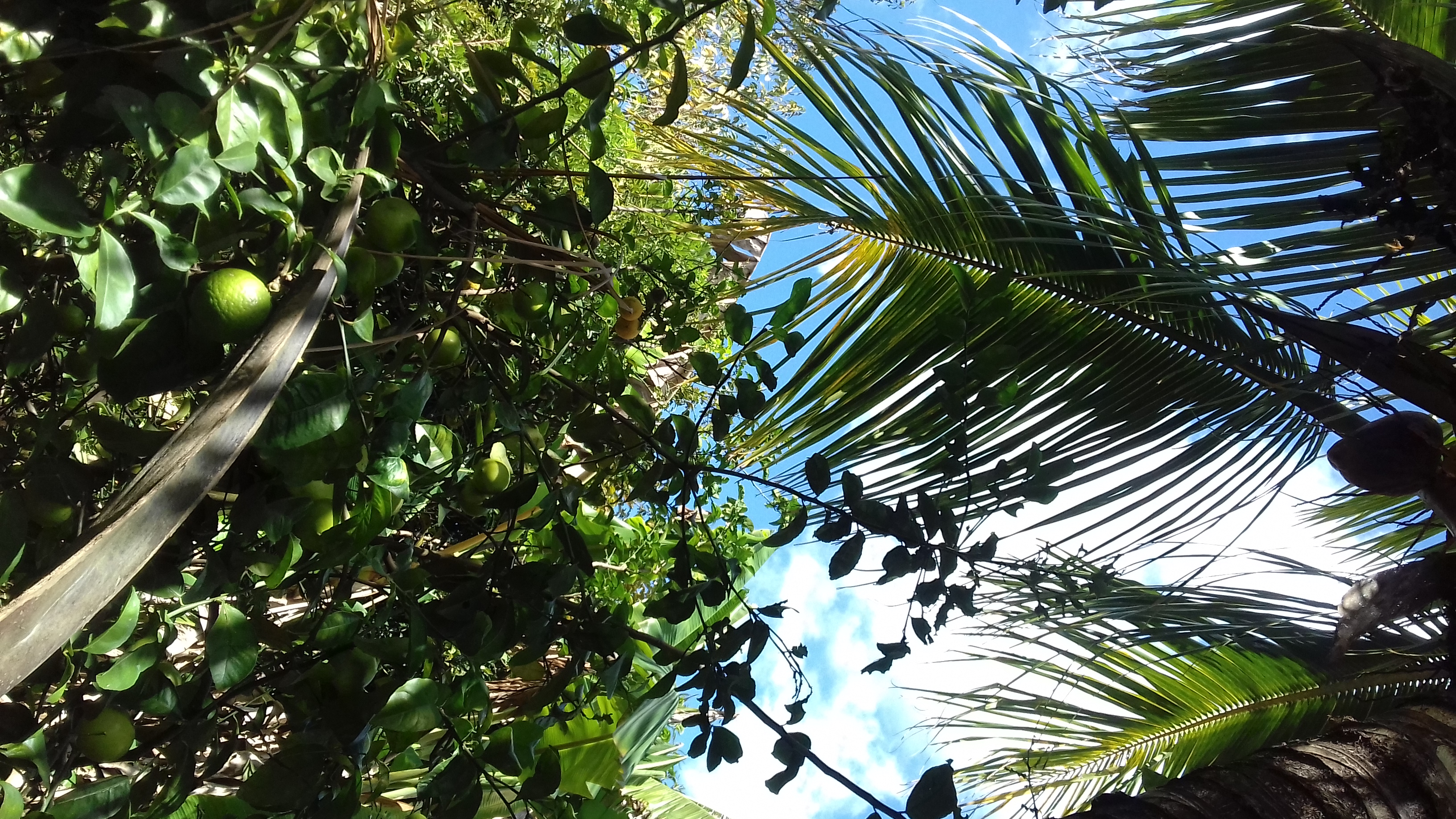 At the end of the trip we paid a visit to the 10 acre holding of one of the Nicaraguan participants, where I took this picture of citrus fruits growing under the shade of a coconut palm, hard by the cassava, yams and coffee bushes. Here, where the sun shines and the rain falls copiously, my strictures against perennial staple cropping are no longer operative. Perhaps I’ll see if I can persuade La Brassicata to move there and get herself on the waiting list for a holding, where I can skivvy for her in the tropical warmth. Oh, alas, ‘tis but a dream – so now I must leave you to schlep out into the snow and empty our compost toilet.

But not without first offering my thanks to Elise Wach, Santi Ripoll, Clare Ferguson and Jorge Irán Vásquez Zeledón for their work on the project and the trip, and to everyone else involved in it for making is so interesting.

49 thoughts on “Campesino a campesino: a trip to Nicaragua”