There’s just time in my busy current schedule for this brief ‘holding’ post to signal a switch in focus from my last few posts, which have concentrated on the furies of Trump and Brexit. The next few will concentrate on more practical agricultural matters, before I return to the Peasant’s Republic of Wessex.

But some kind of linking image is called for to signal the switch…and also to fill up some space on the page in order to make this post seem like it’s longer than it actually is. Aha! Here we go, a photograph of my dear wife and business partner, La Brassicata, doing something practical and agricultural – viz. preparing one of our fine new worm composting bins for action. And also, in relation to previous posts, doing something political – viz. dressing like a woman. I guess her already vanishingly small chance of getting a job at the White House has just taken another hit. Shame. 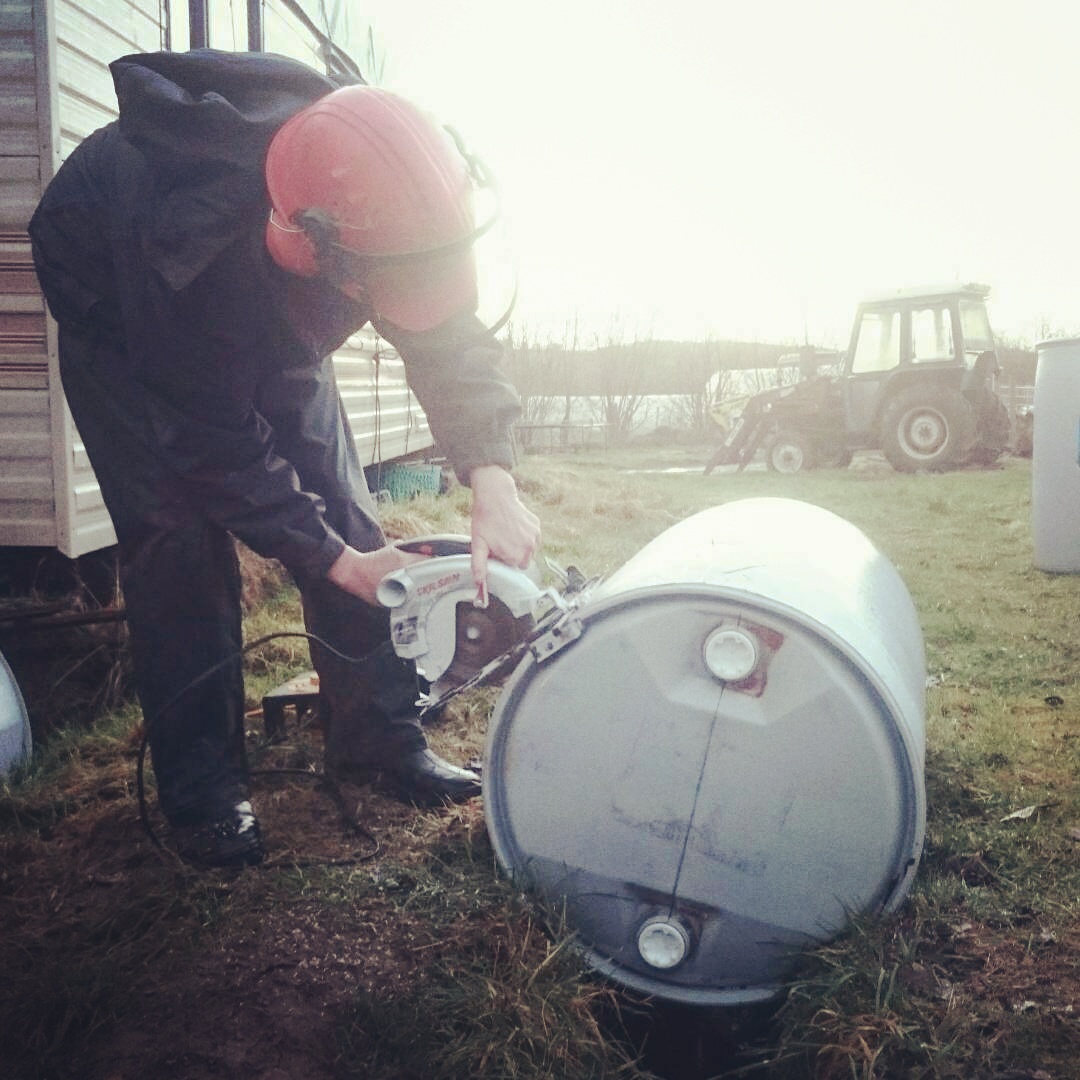 Attentive readers may have noticed that, for protection, La Brassicata is wearing a chainsaw helmet. It’s the farm’s old one, not the spanking new Petzl helmet that I’ve reserved for my personal use while wielding the chainsaw. Hey, nobody said that patriarchy would be defeated overnight.

Talking of gender issues, I feel the need to do something that men are stereotypically quite bad at – namely, apologising for obvious mistakes. Though, if I flatter myself, I’m not so bad at it around the farm. Especially when La Brassicata has the Skil saw in her hand. Anyway, the apology I need to make is that in the welter of comments that I’ve recently received on this site, a few of them got held up in the moderation queue and escaped my notice. So – sorry to those whose words remained too long unpublished. I’ll do my best to keep a better eye on the comments queue. But if you don’t want to place your faith in me, try not to paste links into comments – that way they find their proper niche in cyberspace more easily.

And, finally, talking of comments, of course it’s a delight for any blogger to see the numbers in their comment column regularly ticking into three figures, so perhaps I should just be grateful. On the other hand, sheer number of comments does not a quality blog make. My instinct is to take a hands off approach to comment moderation and allow people to write more or less what they like, so long as it’s not personally abusive – which has sometimes been a close call of late. On the other hand, I don’t want folks to be put off this site by too many long and angry rebuttals or counter-rebuttals. I have a few rules of thumb, honed through the years, about when I think it’s worth engaging with someone with whom I disagree online and when it isn’t. I’m happy to spell them out if anyone wants, but for now I’ll just say that for me personally there’ve been one or two more ‘isn’ts’ than I’d like creeping onto this site recently – and that I’d welcome other people’s views about how best to go forward from here.

Perhaps it’s a sign of the times. There seems to be a rising tide of ‘either you’re with us or you’re against us’ thinking these days, the politics of black and white. I prefer more shades of grey. And on that note, I guess my final comment for now on the Trump-Brexit phenomenon is that I readily acknowledge there were people who voted Brexit and (somewhat less plausibly) Trump out of opposition to neoliberalism and support for localism. Indeed, I seriously contemplated voting Brexit myself for the same reason. However, to suppose that what you voted for is what you’ll actually get seems to me in this instance to greatly underestimate the power of neoliberalism and greatly overestimate the power of liberal democracy.