Recently I got into a spot of bother on Twitter (it’s easily done) after I wrote an essay criticising an astonishingly bad newspaper article by one Leigh Phillips. The thing is, I hadn’t read his book and, silly me, I didn’t realise that you’re not supposed to criticise people’s newspaper articles until you’ve read their books. Well, now I have, and, er…it was astonishingly bad.

I know that some readers of this blog get bored by my engagements with the ecomodernists, whereas others find them interesting. So I’m going to try to keep everyone happy. I feel the need to recoup the wasted weekend I spent reading Phillips’ book by writing a few things about it, but I’m mostly going to do that elsewhere. The interesting task that Phillips sets himself, but makes a dreadful fist of tackling, is a socialist critique of left-green ‘small-is-beautiful’ relocalisation thinking. So I’m hoping to have an article about that on resilience.org soon. He also makes quite a mess of trying to critique the local food movement, a subject dear to this blog’s heart, and to be honest he’s not the only one to get in a tangle over this so I plan to write a little post about that on here soon. I’ve written a wider critique of some of the magical mathematics associated with ecomodernist thinking, including Phillips’s, which has just been published on the Statistics Views website. This post is essentially a brief summary of parts of that article, plus a foray into Mr Phillips’ enchanted world of geophagy, which I hope might be of wider interest even to people who don’t much care to follow all the twists and turns of ecomodernist tomfoolery. It falls into three parts.

…or at least it is if you believe this graph: 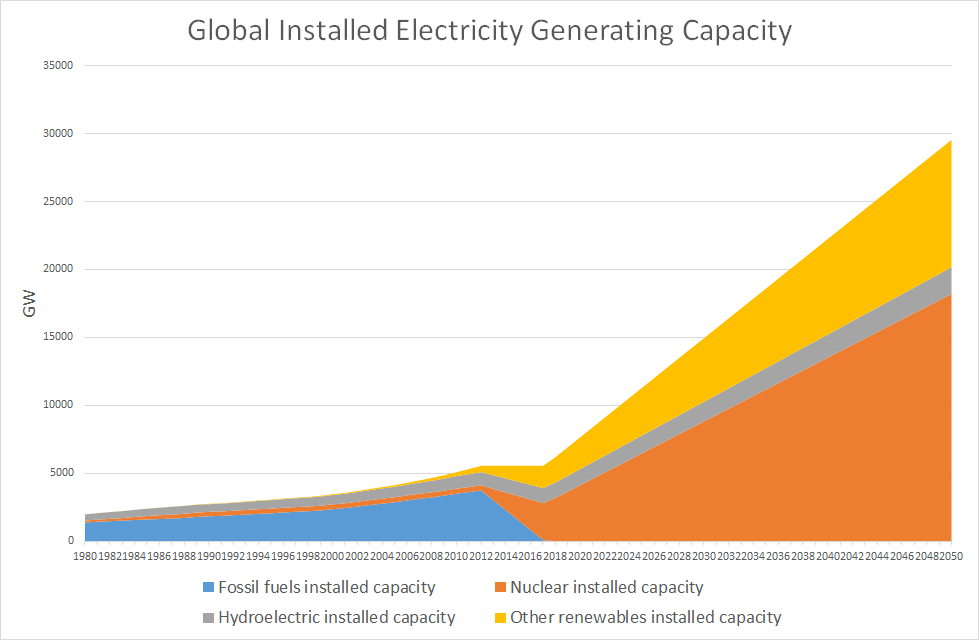 Let me explain. A rising tide of voices is calling upon environmentalists to ‘do the math’ and embrace nuclear energy for the sake of the climate – though, as in this article the ‘math’ is rarely spelled out. So this graph is my attempt to do so. Certainly we need an urgent shift away from fossil fuels in order to prevent runaway climate change. The ecomodernists think that we can switch from fossil fuels to clean energy without disturbing the basic parameters of the energy-intensive economy. But most of our clean energy sources are ways of producing electricity, most of the energy we use isn’t electric, and most of the electricity we do produce employs fossil fuels. So this vision requires two big shifts – from fossil fuels to electricity and from fossil fuel electricity to clean electricity. Mike Shellenberger of the ecomodernist Breakthrough Institute says that we need 1-2 GW of new clean electric energy installed daily until 2050 in order to keep both the climate and the existing economy on track, which sounds to me like it might be an underestimate. Anyway, in the graph I’ve projected electricity generation at 2 GW per day of new clean capacity from now to 2050, assuming that hydro will only be able to double, that nuclear will furnish double the capacity of non-hydro renewables, and that new clean energy will substitute for old fossil energy. I’ve set these projected developments against what’s actually happened with new generating capacity over the last 35 years, using data from the US Energy Information Administration.

I think it makes for an interesting graphic, and perhaps I should let others interpret it as they will. But let me offer a few thoughts of my own. Current global nuclear energy capacity is 379 GW, of which China possesses 23 GW. According to Phillips, China aims to have up to 500 GW of nuclear capacity by 2050 – which is about 22 times more than it currently possesses, and 32% more than the entire world’s present capacity. Phillips says there is ‘ample hope’ that China can do this and decarbonise its power production. Well, if anywhere can, China can, I guess. But even if it does, that’ll only be about 3% of the total global nuclear capacity needed, which at over 18,000 GW will be an increase in nuclear capacity of 4,800% over the next 35 years. To put that into context, over the last 35 years it’s increased by 281%.

Well, we’re taught that you can’t project past trends into the future, which is just as well for the ecomodernists when you look at the graph. But even so, the math that I’ve done here leads me to think that building this amount of nuclear capacity globally within the next 35 years is such a tall order as to be pretty much beyond the bounds of possibility – and that’s to say nothing of the other transitions that would be necessary to put the energy properly to work. Or of what the resulting society would be like. Or of how countries a tad poorer than China might fund the transition.

But leaving all that aside and just focusing on the math – or the maths, as we say here (why is British maths plural, and American math singular?) – I’ve heard plenty of people saying that greens need ‘to do the math’ on nuclear, but I’ve rarely seen anyone spell out what the math is, as I’ve tried to do here. The casual reader may conclude that the energy transition is simply a matter of overcoming public misgivings about nuclear power and building some more nuclear installations. The reality, it seems to me, is that ecomodernist nuclear math is a fantasy mathematics – a magical mathematics, and not in a good sense. So I present my graph as Exhibit A in the case for energy descent.

Phillips argues that carbon emissions can be laid disproportionately at the door of the rich, so that, in his words,  “phrases such as “the greenhouse gas emissions of the average American” or “per capita consumption” contain absolutely no useful information” (Phillips, Austerity Ecology, p.56).

His evidence for this mostly comprises a list of the impressively carbon-intensive features of Roman Abramovich’s luxury yacht, but he does also state that the top 20% of income earners account for roughly 70% of consumption in the USA. So perhaps we could run a quick plausibility check on his argument by allocating out emissions in the same proportions. According to the World Bank’s latest world development indicators, US carbon dioxide emissions stand at 17.5 tonnes per capita (the 10th highest in the world, out of 193 countries). If we allocate 70% of those emissions to 20% of the population and recalculate the figure with that 70/20 omitted from numerator and denominator, we get a figure of 6.4 tonnes per capita, which would then place the US 50th out of 193 and still more than double the median emission figure of 2.5 tonnes per capita.

The thrust of Phillips’ argument is that ordinary working people around the world sit on the same side of the carbon footprint fence, in contrast to the rich who deserve all the blame for the climate crisis. It seems to me pretty clear that that isn’t the case – the emissions of poor people in rich countries vastly outstrip those of poor people in poor countries, or even of rich people in poor countries. I don’t propose to discuss the policy implications of that right now. All I want to suggest is that, as it turns out, phrases such as “the greenhouse gas emissions of the average American” or “per capita consumption” do contain some useful information after all. Unless you wish them away with magic mathematics…

Part 3: The myth of the myth of carrying capacity

The third chapter of Phillips’ book is entitled “To infinity and beyond! (Or: the myth of carrying capacity)”. You can pretty much tell from the Buzz Lightyear mathematics of its title that this chapter won’t be too good, and so it proves. Nevertheless, I’m nothing if not tireless in my pursuit of dodgy ecomodernist arguments so below I offer you a deconstruction of Phillips’ logic in this chapter, which runs something like this:

(1) There is no precise and objectively quantifiable point at which we can say that human activities have exceeded the earth’s capacity to support them.

(3) …well perhaps there is a limit at some point – if all the carbon on the entire planet was embodied in human beings, the earth’s carrying capacity would be around 1020 people. “To be fair,” Phillips concedes, “these hundred quintillion people would all have to be cannibals”. (Yeah, that’s right Leigh, that’s the only problem here…). But, he continues, these “back-of-the-envelope calculations do at least appear to tell us that Earth has the capacity to carry such a load” (p.63). Yes, he did actually write that sentence. The blurb on the back of the book informs us that Leigh Phillips is a ‘science journalist’ who writes for Nature. Nice work.

(4) Thomas Malthus was a 19th century clergyman who thought that human population growth would outstrip the capacity of the earth to provide sufficient food. He further thought, pessimistically and misanthropically, that no actions should be taken to lessen the plight of the starving poor. But his predictions have so far proven incorrect.

(5) Anybody who claims that there may be any biological or physical limits to human growth or expansion is thus a Malthusian, who is therefore…

Now then, there are various problems with these lines of argument. To begin with, the…oh God, did I say that I was tireless in my pursuit of dodgy ecomodernist arguments? I suddenly feel overwhelmed with fatigue. Much as I’m prepared to waste a certain amount of my time arguing with ecomodernist nonsense, even I have my, ahem, limits (excuse the misanthropy). So I’m going to stop right here. Let me just say this: if you’re puzzling over where the chain of logical inferences in the numbered list above breaks down, I’ll leave you with this clue: it’s a whole number which is bigger than one and smaller than three.