Jahi Chappell recently copied me into an interesting Twitter exchange with Erle Ellis of the Breakthrough Institute (and one of the signatories of the Ecomodernist Manifesto, which I’ve criticised in various posts1) about the global exit from small-scale farming. His tweet also elicited responses from Haroon Akram-Lodhi, professor of international development at Trent University and co-editor of the excellent Peasants and Globalization, and from Rachel Bezner Kerr, a development sociologist at Cornell.

Ellis wrote ‘Opportunities of smallholder agriculture are so limited- people moving to cities are voting with their feet’. Akram-Lodhi appeared to agree: ‘People leave smallholder farming because it does not offer a livelihood. If it did, fewer would’, while Bezner Kerr argued ‘Current policies support industrial large-scale farms so yes, many farmers give up, but can change!’, a point echoed by Jahi in his responses.

As an advocate of small-scale farming in both rich and poor countries to help address our multiple problems, I’m in Jahi’s camp on this one. But I’m under no illusions about what life is like generally for poor small-scale farmers around the world. It’s hard to disagree with Ellis that the opportunities for small-scale agriculture are limited, so if people are ‘voting with their feet’ it’s hardly surprising. Still, there are various aspects of the ‘voting with their feet’ narrative that I’d question. I’m not an expert in these matters, but since Jahi’s tweet referenced a number of people who most likely are, I’ve framed these doubts in terms of five questions to the experts. I sincerely hope somebody who knows about these things might take the trouble to reply – I’ll be very grateful if they do, because these are questions I’ve long wondered about.

Before the questions, a few facts and figures. As shown in the graph below derived from the World Bank’s world development indicators2, in 1966 only 36% of the world’s 3.4 billion people lived in urban areas, whereas in 2014 53% of the world’s 7.3 billion did so. So, as has been widely remarked, we’ve moved from a majority-rural to a majority-urban world, the crossover occurring in 2007-8. But as the graph also shows there are more people living in the countryside now than ever before. In fact, the current rural population of 3.4 billion is about as many people as lived in the whole world in 1966. Still, there’s no doubting the growing importance of the urban: there are 2.7 billion more people living in urban areas now than in 1966. 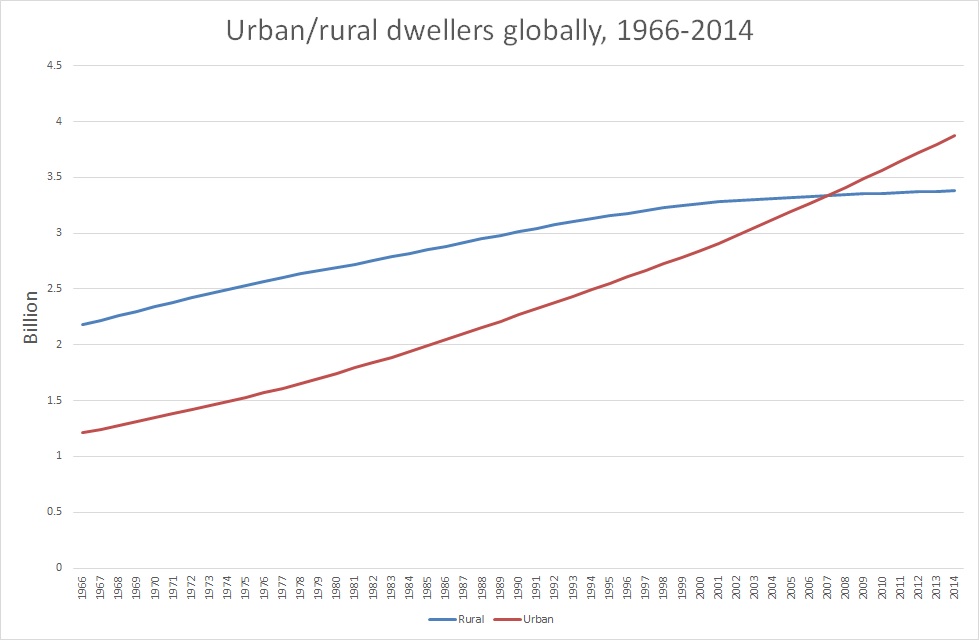 Now to the questions…

Question 1: How many foot-voters are there?

So the urban population has grown by nearly 3 billion over the last 50 years. But how many of these people actually fall into Ellis’s category of ex-rural foot voters? To answer that, we’d firstly need to rule out everyone actually born in urban areas through natural increase who therefore had no vote to make, a number that I’d imagine has increased considerably over the past few decades. I think we’d probably also need to rule out people who have stayed put in a countryside that has urbanised around them – a significant development in China, I believe, where (along with India) the sheer number of people drives a lot of the global demographic statistics. These folks may love their newly urbanised countryside or they may loathe it, but either way I’m not sure we can simply say they’ve ‘voted with their feet’. Then there are people who’ve moved to urban areas through compulsion – forced out by dam projects, land grabs, nature reserves and the like. If they ‘voted’ then there was only one tick-box on their ballot paper. And there are a lot of people living temporarily in urban areas while retaining a footing in the countryside – either short-term, maybe seasonal, work in the city before heading home to the family farm, or long-term urban residence with a view to returning to farm when they’re older and richer. These people may be ‘voting with their feet’ in some respects, but not in others. They’re hedging their bets with complex, mixed strategies of economic activity. How do they figure in the urbanisation statistics, and how do we count their vote? Despite all of the above, there are doubtless still a lot of erstwhile small farmers around today who at some point in their lives have said ‘screw this’, quit farming, and moved permanently to the town. What I’d like to know is, how many?

Question 2: Where do the foot-voters go?

I’d also like to know where the foot-voters go. People often seem to think in terms of migration to mega-cities like Mumbai, Manila or Lima, but most people don’t live in these places. In fact, presently only 22% of the world’s population lives in cities of more than a million people2. As I understand it, the definition of ‘urban’ used in the urban/rural definition is a settlement of 10,000 people or more. So how many of the foot-voters are going to small towns near their former rural homes, and what are the implications of this for the kind of livelihoods they seek?

Question 3: How do the foot-voters fare?

Presumably the foot-voters must have a strong sense that a permanent move to the town will make them enduringly better off. After all, to completely abandon a footing on the land, however precarious, is to deny themselves a potential source of income. My feeling is that there’s a lot of bet-hedging and rural-urban to-and-froing going on that’s obscured in the ‘foot voting’ narrative. And I suspect that a good many of the full-on foot-voting farm-abandoners are relatively well off folk who’ve got something lined up for themselves in the town. But I’d be grateful if someone could confirm or disprove this line of thinking by pointing me to some good research evidence.

I’d also be grateful if someone could point me to some good evidence on social mobility in large city slums. It seems to be a heinous crime these days to romanticise rural or peasant lives, and yet we do it so insouciantly with regard to the urban. In his book Whole Earth Discipline, Stewart Brand writes “let no one romanticise what the slum conditions are…but the squatter cities are vibrant…everyone is working hard and everyone is moving up” which strikes me as about as romantic an appraisal of life in a slum as it’s possible to write. But are they ‘moving up’? Where’s the evidence? Brand provides none. You’d expect Gordon Conway – eminent hunger expert and author of One Billion Hungry: Can We Feed The World? – to do a better job of marshalling some decent evidence one way or another. But what he actually does in that book is recount the plot of a novel in order to make the claim that permanent rural-urban migration is a route out of poverty. I came across a study of rural-origin rickshaw-pullers in Dhaka that suggests otherwise3, and another one of Bangalore slum residents suggesting likewise4. But I’d like to gain a better sense of the evidence overall. The foot-voters presumably hope for greater income and maybe for upward social mobility. To what extent are their hopes realised?

I’d imagine some methodological difficulties present themselves in answering that question. It seems commonplace nowadays to define poverty in terms of metrics like ‘$1 per day’. But I’m not entirely sure how these metrics are constructed. I believe the majority of the ‘<$1 per day’ poor are rural residents, but if by ‘a dollar’ we mean hard cash in hand I suspect that urban residents may need more hard cash crossing their palms in order to maintain a given standard of living than their rural counterparts. Any comments?

Question 4: Why do the foot-voters still exist?

Foot-voting creates an image of individuals making individual decisions, but surely there are wider systemic forces involved? Presumably, foot-voting occurs mostly when there is strong economic growth creating good urban employment opportunities, the urbanization and the foot-voting being consequences of the growth and not prime movers of it. And in places where there isn’t strong economic growth, well then… But maybe someone could point me to the evidence…

If I’m right, then the curious thing is that there’s been prodigious global economic growth for centuries and yet there are still millions of small farmers in the countryside, apparently ready to ‘vote with their feet’. Perhaps there’s a problem here with the ‘foot voting’ narrative in its voluntarism and finalism. Is it simply a matter of small farmers uniformly now deciding that they’d like to quit farming and move to the city, thus soon bringing down the final curtain on small-scale farming? Well, Aesop was writing about the town mouse and the country mouse over 2000 years ago and it seems we’re still playing out that narrative. Have small-scale farmers been “left behind by modernity”, to quote Erle Ellis’s Breakthrough Institute colleague Mike Shellenberger, so that they need to move to the city where they can catch a bit of modernity for themselves? The truth is, almost everywhere, rural labour has long been thoroughly organised by the dictates of the global economy. So I suspect that people in the countryside who feel ‘left behind’ and who want to ‘vote with their feet’ may find themselves working against the grain of an economic system that pretty much wants them where they are and may not do a very good job of accommodating them off the farm – unless times are good and, for now at any rate, it needs their labour in the city. I did a quick analysis of World Bank data for just eight (admittedly quite populous) countries5 and found that they had a total of nearly 400 million rural people living below the national poverty line. Do the world’s cities have enough room to accommodate people who might ‘vote with their feet’ in those kinds of numbers?

Question 5: What about the but(t)-voters?

Let me put it another way. Over the past two or three hundred years globally there’s been a succession of enclosures, clearances, land grabs, migrations, forced proletarianizations, green revolutions, structural adjustment programmes and goodness knows what else, all with the aim or the result of getting people out of small scale farming. And yet there are more people living in the countryside now than ever before and still million upon million of poor small-scale farmers. So what is to be done about all of these people who seem to be voting with their butts, or voting “but…”, or wanting to vote with their feet but lacking the opportunity to do so? The dominant idea seems to be another helping of the same medicine – more proletarianization, more land grabs, a ‘doubly green revolution’ and so on. An alternative might be to accept that the world’s economy is structurally incapable of absorbing the entire global population into the ranks of the prosperously waged, and to focus instead on making life just a little bit easier for those impoverished small-scale farmers that Mike Shellenberger says have been ‘left behind’. So my final question for the experts is what policy changes do you think could be made to even up the ballot paper a little and make life easier for the millions of people who remain small-scale farmers?

Erle Ellis is widely quoted as an enthusiast for the concept of the Anthropocene – emphasizing the geological scale upon which humans have altered planet Earth. If I understand his arguments correctly, he says that we don’t face natural limits because humanity has the ability to change the parameters of the ‘natural’. And yet here he is, apparently saying that people are leaving the small farm as if there’s nothing that can be done about it, as if it’s some kind of implacable force of nature. I don’t buy it.

14 thoughts on “Voting with their feet: some questions for the experts”