Well, I lied to you. I said I was going to write a concluding post on the theme of the commons. But then I realised that this topic is kind of connected to a larger set of issues I’ve been wanting to explore about efficiency, scale, agrarian structures and the like. ‘Kind of connected’ is a useful phrase I picked up from an undergraduate lecture by one of my professors, Paul Richards (author of the brilliant Indigenous Agricultural Revolution…I wish I’d realised then how lucky I was to be taught by him). Paul said that on bad days it felt like the only conclusion he could come to about the world was that everything was kind of connected to everything else in complex ways that he couldn’t quite understand. And ain’t that ever so.

So I’m going to hold off on the conclusion to my commoning theme for a while, and work up to it more slowly and obliquely. Mind you, since introducing a ‘Donate’ button to my blog I suppose I do have a paying public to think about now. Let’s have a look at the account balance, then. Oh. OK, I’ll write what I damn well please…

Now then, Clem commented a couple of posts back on the issue of economies of scale in agriculture, and Brian Miller wrote an interesting post about farm energy and haymaking not so long ago. So let’s bring those themes together. Are there economies of scale in grass-cutting? My friend, I bring you the results of the official Vallis Veg mowing trial.

So, one bright June morning I spent a minute cutting grass with each of the following five increasingly scaled up mowing technologies available to me on my holding:

Only a minute, you say? Well, I’m a busy guy – besides, how long do you fancy pulling out perennial pasture grass with your bare hands?

And here are the results: 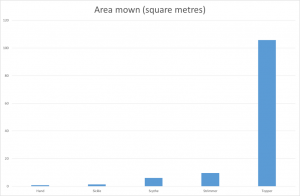 My scythe isn’t the biggest and it wasn’t at its keenest, nor am I the best scythesman. Then again my tractor/topper aren’t the biggest either. But really there’s no two ways about it, the middle ages (scythe) beats the bronze age (sickle) by a factor of more than 4, and the industrial age (tractor) beats the middle ages by a factor of over 17. Comparing the tractor to bare hands, we could say there’s a labour efficiency factor of at least x132 with modern technology over no technology.

But let’s look at the energy inputs involved. Here I’m assuming a person eats 2,500 calories = 10.5 MJ per day, so I impute a minute’s portion of that daily intake to the operator in each case. Then there’s the embodied energy in the tools and machinery. Doubtless how to figure this in could be debated endlessly, but for simplicity I’ve taken a (probably now dated) standard figure for the per kg energy used in steel manufacture multiplied by the weight of the kit and the fraction of its expected working life devoted to the minute of grass cutting. Finally, I’ve added in the energy contained in the fuel used on the assumption that petrol and diesel contain about 36 MJ/l. I’m neglecting a lot of the other upstream costs of producing machinery and fossil fuel which probably biases the analysis in favour of the powered machinery, but there you go. Like I say, I’m a busy guy.

Here are the results: 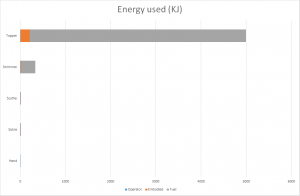 No surprises that the quicker the method of cutting the more gross energy it uses. The assumptions underlying my energy analysis are on an accompanying spreadsheet available from my Research and publications page. Of course, these assumptions are questionable, but I doubt any plausible set of alternatives would change the overall picture much. I’d be interested to know how a big modern tractor with a more efficient diesel engine would compare with my Ford 3600. Possibly it’d do a better job. On the embodied energy front I doubt that these tractors will still be plying their trade on small farms in forty years’ time as many of the Ford 3600 generation of tractors are, but since fuel use is the major factor, well…I guess one of those beasts could probably cut ten times the area of my rig in the same time, though it’d still probably use more fuel. How about plugging in these assumptions: compared to my tractor setup a big modern rig weighs four times more, cuts ten times more, uses double the fuel, and has a working life of 15 years working 2 days a week.

At any rate, let’s now put the two measures from the previous graphs together in a ratio: 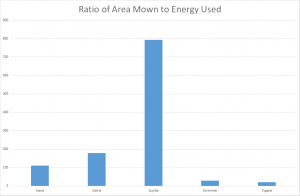 So, when it comes to energetic efficiencies of scale, the accolade goes to…the Middle Ages! Proof at last of what I’ve long argued on this site – a bit of technology is a wonderful thing, but the trick is knowing when to stop. The modern tractor rig assumptions improve the output/input ratio from 21 (my tractor) to 99 – only a little less efficient than using bare hands (110), but still eight times less efficient than the scythe.

OK, now I’m not seriously arguing that modern agriculture should dispense with its tractors and other powered machinery and return to the scythe…though I’m probably prepared to take that argument more seriously than most. Still, I think analyses like this do call into question the terms of the debate about agricultural efficiency or economies of scale. Modern mechanised agriculture has been labour ‘saving’, essentially by turbocharging traditional agricultural practices with the use of non-renewable and polluting fossil fuels. But it’s not especially efficient.

Now, if I were a mainstream economist, I’d probably just look at labour and fuel inputs as (relatively) substitutable factors of production. With agricultural diesel at 50p per litre and the minimum wage at £6.50 per hour the choice of grass-cutting method is a no brainer. I suppose if you figured in a sufficiently high carbon price as an externality it might change the picture a bit, but hey who cares about carbon pricing? Certainly not the governments of the world.

The problem with looking at labour and fuel inputs as substitutable factors of production is that it erases the politics and the history behind that simple 50p/l vs £7.50/hr choice. There’s a political and historical backstory here.

For proponents of agricultural ‘modernization’, the backstory is one of technological improvements releasing a grateful peasantry from backbreaking drudgery on the land (aside: in writings on agriculture, use of the word ‘backbreaking’ is a surefire signal that the virtues of Monsanto or John Deere are about to be extolled). For its opponents, the backstory is one of the deliberate separation of the working class from their means of subsistence on the land so they could be redeployed as industrial wage slaves. In both cases I think the narrative somewhat overstates the coherence of the process, which really emerged long-term from people responding to the more immediate incentives of the 50p/l vs £7.50/hr kind without being overly concerned about what kind of society (whether benevolent or malign) they were ultimately creating – though as David Graeber argues in his excellent tome Debt: The First 5000 Years, such responses themselves emerge from longer-term culture histories concerning money and exchange.

In any case, the modern result of these trends has been the creation of a pretty dysfunctional agricultural economy whose dominant tendencies involve substituting jobs with diesel wherever possible, paying less for food than its costs of production, shoring up the deficit for the lucky few rich farmers with government subsidies, pricing rural land beyond the means of ordinary people and ordinary farmers, and concentrating people in urban areas, where many experience chronic unemployment or underemployment, while the consequences of carbon emissions, soil loss etc are left to future generations to sort out, if they can.

Now, I’m not proposing so simple a solution to this mess as arming the un(der)employed urban masses with scythes and telling them to go cut something down (interesting, if alarming, as that process might be). Or banning tractors. I don’t think there are any simple solutions. But one way to move towards some complex solutions to these complex problems is to start telling some different and, yes, more complex stories about agriculture and its history and economics. And perhaps one of these stories, as per my grass cutting experiment, is to point out that agriculture is not more efficient, but less efficient than it used to be, at least according to one significant measure of agricultural performance. Perhaps you could still say that it’s more labour efficient, but wrapped up in that concept are a whole set of issues about the social organisation of labour, energy futures and so on. We need to be debating those issues openly, rather than erasing them by recourse to spurious notions of efficiency or idle conjectures about the future availability of limitless clean energy. I’m aiming to make my own particular contribution to that debate in this ongoing cycle of posts…

10 thoughts on “Of agricultural efficiency: the Vallis Veg mowing trial”