Maybe it’s time to write something about practical farm issues for a change, and what could be more practical than compost? In principle, compost is one of those ‘what’s not to like’ phenomena. You pile up unwanted organic matter that otherwise requires disposal, mix it with a bit of air and water and, hey presto, you end up with a magical substance that feeds your next crop and builds your soil. Compost is foundational to the organic farming idea of building beneficial biological cycles into farming practice.

But the practicalities of composting raise quite a number of dilemmas. Here are five:

So, what is to be done? If I were running a small domestic garden, I think these problems would be manageable. And if I were running a large farm I’d use a big tractor and other energy-intensive kit to develop a decent composting system. It probably wouldn’t surmount the energy issue, but then nothing really does on a large farm. On the small farm, however, as with many things you get caught between two stools.

Steve Savage, a persistent critic of organic farming, decries its use of compost for similar reasons to those outlined above and advocates the use of anaerobic digestion instead. Such critics often forget that good old composted farmyard manure is widely used in conventional farming too, though perhaps only in those areas which have thankfully managed to retain a bit of mixed arable and pastoral land use and haven’t yet succumbed completely to the depressing uber-specialisation wrought by big agri where soluble synthetic fertiliser is king. Still, Savage has a point – in an ideal world, a digester is probably the best way to go. But then the argument tends to drift in favour of massive dairy farms or feedlots with ‘efficient’ industrial-scale digester facilities. I don’t know if there are any good energy lifecycle analyses of such facilities, or of large-scale mechanised farming machinery powered by methane, biodiesel or renewable electricity but if anyone could point to me to some, I’d be grateful. My feeling is that the whole-life energy costs, including building these big plants and then trucking the raw materials around, would be pretty high. Likewise with the opportunity cost of a fossil fuel-free industrial-mechanical agriculture would be high. But I’d like to see some good data. As I’ve suggested before, there are many other external costs of large-scale agriculture that suggest to me the wisdom of small-scale farming solutions, but I don’t deny that compost and fertility cycling is a problem for farming of all kinds which isn’t simply banished by scale.

One alternative for the small farm is a small-scale, backyard digester of the sort pioneered in China. My worry there is that if the facility isn’t very well built the chances are it’ll leak methane and lose its advantage, and to build it well may take more time and money than the average small farmer can really afford. But it’s a technology I’d like to keep my eye on. Some people coming from a vegan perspective are excited by such technologies as a means to turn grass into something useful without livestock. Call me old-fashioned, but personally I prefer to see ruminants on grass in mixed farming systems, though again it’s an intriguing idea and it would be worth seeing a good lifecycle energy or emissions analysis.

Anyway, the compromise strategy we’re currently pursuing at Vallis Veg is a much lower tech one. It has the following components: 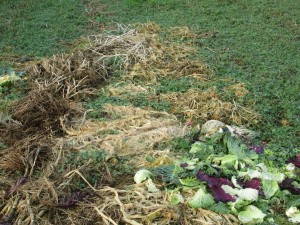 It’s not perfect, but it’s the best I can currently think of. As always, I’d welcome any comments.